“Writer’s block comes from the feeling that one is doing the wrong thing or doing the right thing badly. Fiction written for the wrong reason may fail to satisfy the motive behind it and thus may block the writer, as I’ve said; but there is no wrong motive for writing fiction. At least in some instances, good fiction has come from the writer’s wish to be loved, his wish to take revenge, his wish to work out his psychological woes, his wish for money, and so on. No motive is too low for art; finally it’s the art, not the motive, that we judge.” ― John Gardner, On Becoming a Novelist 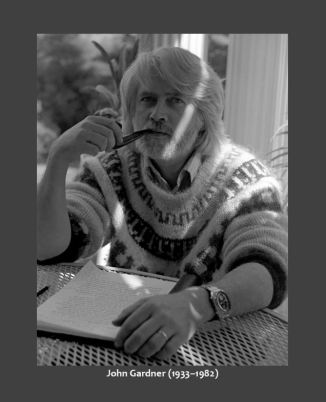 John Gardner (1933–1982) was born in Batavia, New York. His critically acclaimed books include the novels Grendel, The Sunlight Dialogues, and October Light, for which he received the National Book Critics Circle Award, as well as several works of nonfiction and criticism such as On Becoming a Novelist. He was also a professor of medieval literature and a pioneering creative writing teacher whose students included Raymond Carver and Charles Johnson. When I worked at Bennington College in Southern VT I would often see him walking across the campus during the Summer Writing Workshops. Or when his white hair was flowing as he rode his beloved motorcycle on campus or away. – j.kiley