fill in the colors…
from blog: recovery health

reblogged from: http://recoveryhealth.me/2012/06/30/fill-colors-in-the-life/
had trouble with reblog so including link in post. photograph below is from this blog “recoveryhealth.me”

does this not make you reminisce about the days of the hippies and the alphabet drug?

something magical this way comes
by jennifer kiley

the trip tonight will be more visual than words. i am hoping to create an atmosphere of mystical sites and places and things, oh my. where to begin? tonight there is a full moon. so, why not an image that feels like you could reach out your fingers and feel the smooth surface of the moon rocks. shall i reach into my magician’s bag and make appear- presto – a moon so astrologically connected to my soul being of the sign of cancer. the tides are effected. the moods are effected. the werewolves come out to chase after bella to rescue her. a little “twilight” humor. oh, what the hell. all creatures come out to bay at the moon. when one can walk at night from the reflection of her brightness, how magical is that? i present to you the moon.

this is an image i found today that reminds me when hans solo was frozen in “star wars.” this silver dragon appears to have met the same fate with the silversmith trapping her and then using her as a magnificently adorned gate to block entrance from strangers with unknown motives. she is a majestic creature. it is possible she is under a spell and that at any moment someone will speak the language that holds the magic words to release her. “leviosa” damn, that’s not it. well, here she is. if there is anyone who can release her like arthur released “excaliber” from the stone, then head on out to dublin, ireland to give it a try.

the purple butterfly. a beautiful creature. magical, too. have you ever heard of the butterfly effect. there was a film made about it. a young man goes back in time to try to change an event. it wouldn’t matter what event. just altering the past will have a rippling effect throughout the future of time and the cause and effect principle. if you change on infinitesimal element while you are in the past. it will have monumental effect into the future. it may cause you not to be born. or hitler could win wwii. anything is possible. many films have been made dealing with this phenomena. “it’s a wonderful life.” “frequency.” “groundhog’s day (techniquely speaking). “the butterfly effect” where he actually keeps returning to the past and finds that each time screws up the present more severely. “sliding doors” with gwyneth paltrow. she has two realities going on at the same time. one where she misses the underground and the other where she is on time and makes her train (highly recommend). run, lola, run. a brilliant film. the fact that lola bumps into someone instead of passing by may lead to a painful death after suffering paralysis. as such, seemingly inconsequential actions can be seen to have drastic long-term results. and lets not forget “back to the future” and how mcfly almost terminates his whole family out of existence.

the “butterfly effect,” the concept that small events can have large, widespread consequences. a massive storm might have its roots in the faraway flapping of a tiny butterfly’s wings.

translated into mass culture, the butterfly effect has become a metaphor for the existence of seemingly insignificant moments that alter history and shape destinies. typically unrecognized at first, they create threads of cause and effect that appear obvious in retrospect, changing the course of a human life

all from butterflies flapping their wings a wind storm can occur in any part of the world. i always felt that butterflies were pretty amazing.

Stonehenge was produced by a culture that left no written records. Many aspects of Stonehenge remain subject to debate. The multiplicity of theories, some of them very colourful, are often called the “mystery of Stonehenge”. A number of myths surround the stones.

suggested that Stonehenge was a place of healing – the primeval equivalent of Lourdes. they argue that this accounts for the high number of burials in the area and for the evidence of trauma deformity in some of the graves. however they do concede that the site was probably multifunctional and used for ancestor worship as well.

the curative properties of the stones was also what gave the idea that Stonehenge was constructed as a funerary monument. Whatever religious, mystical or spiritual elements were central to Stonehenge, its design includes a celestial observatory function, which might have allowed prediction of eclipse, solstice, equinox and other celestial events important to a contemporary religion.

another theory, that came out in 2012, suggests that the monument was intended to unify the different peoples of the British island. this theory suggests that the massive amount of labour involved in the construction of Stonehenge necessitated the inter-regional cooperation. 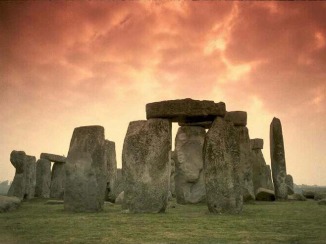